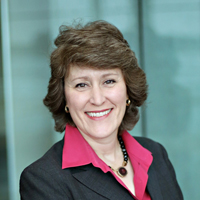 Deborah Wheeler is the Chief Information Security Officer (CISO) for Ally Financial.  She’s in charge of establishing policy and programs to support the security of electronic customer and company information. The most difficult part of her job, but also the most rewarding, is educating employees and customers on information security and privacy — a challenge because it has to be done delicately in a manner that doesn’t cause panic or paranoia.  Deborah shares her story with us…

Sarah Worsham: In your entire career, what’s been your favorite job or project and why?

Deborah Wheeler: My favorite job is the one I’m currently doing! I love Ally and the people I am privileged to work with daily. My favorite projects, regardless of company, are the ones where I’m building an information security department. I love the challenge of building a function that is so essential to protecting and enhancing a company’s reputation through the mitigation of risk.

Sarah: Was there a particular event or moment when you decided to pursue a career in STEM?

Deborah: There was no one particular moment when I decided to pursue a career in STEM. I started out as a fine arts major in college and wanted, for a very long time, to be a musician! I wound up in technology purely by accident, but I’ve never looked back.

Sarah: What has been most important in terms of getting where you are today?

Deborah: The most important aspect of achieving my level of professional development has been experience. I entered the field of information security long before there were college majors on the topic. Having had the opportunity to speak in college classrooms on information security and at the high school level, it has become apparent to me that there are some careers that you simply cannot prepare adequately for in college. I believe that information security is one. It’s great to learn about technology and learn about hackers and malware from a contextual perspective, but until you experience it first hand and have to defend a company against it, it’s just not something that can be taught, in my opinion. When I was in college majoring in information systems and working full-time in the field, there was a marked difference from what I learned in the classroom and what we were actually doing in the business world.

Sarah: Did you have any mentors or role models growing up that led you to this career? How did they influence you?

Deborah: Growing up I did not have any mentors or role models in STEM careers. My mother was a home maker, and my father worked for the city we lived in. Neither had college degrees. While attending evening college, I worked full time for a law firm. As computers were just becoming prevalent for home use, my employers sent me to look at them for use in our business environment. Learning how to use them, and more importantly how they worked, was both fun and challenging to me and came easy. Shortly thereafter, circumstances required a move to another state during my studies, and upon transferring colleges, I opted to change my major to information systems.

Sarah: Did you have to overcome any obstacles to get where you are? How did you do that?

Deborah: OH YES!!!!! Attitudes about women in technology were very prevalent in the late 80’s and early 90’s. Working as an engineer in a telecommunications firm in the early 90’s was challenging in and of itself, but I was only one of 3 women in a department of 150. Sexual harassment was very common. Attending conferences in my chosen field was always “interesting” as there would be several thousand attendees, and I was easily one of the only women in the room. Snide remarks were rampant, and I learned early to develop a thick skin. By the late 90’s and the early 2000’s, it was becoming more commonplace to see women not only at those same conferences, but to also see more women earning technology related degrees and joining the work force in technology careers. The lessons I took away from those early difficulties of establishing myself in the field were to be true to what I knew I wanted and could do, find open-minded individuals who could help guide me on my chosen career path and teach me to think creatively about how to deal with naysayers as easily as they could teach me how to deal with difficult technical problems, and to never give up….no matter how many times you want to.

Sarah: Have you ever had any difficulties in your career due to your gender? How did you handle them?

Deborah: Earlier in my career, I had a particularly difficult sexual harassment issue that was handled well by the company; however, the individual in question was allowed to keep his job. The tension created by his overt actions and the subsequent reporting of it by another male co-worker, created a very tense environment for some time afterwards. But I never wavered in my desire to be professional in the workplace and to consequently continue to treat him with the same level of professional respect I held for him before the incident. Over time the tension eased, and shortly thereafter I left for another opportunity. Incidentally, it was our male boss who deserves the credit for handling that situation. I’ve encountered many wonderful men in my field who have both supported my goals and career ambitions and who have proved invaluable as mentors and role models.

Sarah: What advice do you have to anyone interested in a similar career?

Deborah: My advice for anyone wishing to pursue a STEM career is to just do it! Like any career, having passion for the subject matter, I believe, helps you get through the difficulties, adds to your credibility in the long run, and distinguishes the individuals who are successful, from those who are not.

Sarah: In your opinion, how can we get more girls interested in STEM careers?

Deborah: I think we need to stop talking about women in STEM fields as though it is an oddity or rarity. I doubt very much that there are similar discussions about men entering nursing careers, yet I would venture to guess that male nurses are about as rare as women scientist or engineers. Perhaps more so. Young women can do or become anything they want. But in order to believe this, I think we, as their mentors and role models either officially or unofficially, need to stop talking about STEM careers as though they are unachievable by women, or as though women will experience tremendous difficulties in pursuing them. We need to treat them for what they are… another option on the table for talented, intelligent young women to pursue.

Thank you so much Deborah! We hope you found her story helpful, interesting and inspiring.  If you would like to share your own story, please submit your information and we’ll be in contact soon!